Knowledge Production and the Superexploitation of Contingent Academic Labor

In the corporate university, a capitalist enterprise, the fact of contingent academic labor should not be seen as an aberration, a scandalous (but perhaps temporary) anomaly that could be solved within and by the very system that produces it. Rather, the ever-increasing number of contingent academic workers, and the consequent reduction in the number and power of full-timers, is the norm. Not only is it the norm, but it is the coherent, logical consequence of the corporatization process. That is, there could be no corporatization without the logic of sovereignty and domination whereby contingent labor in the first place, and all other labor in the second, must be, as is, superexploited. The originary idea of the university as a place for learning (perhaps even disinterested learning) is gone.  To have faith in that idea at this point in time would be having faith in a romantic past, it would be a useless, if not politically dangerous, nostalgia. Yet, if the past is barred, the future is not. What must be made clear, however, is that the transformation of the university is not possible if society itself is not transformed. If the university has become a capitalist enterprise, if the relationship between the university as such (its administrators) and its workforce (including the often reluctant full-timers) is the relationship between capital and labor, then the antagonism within the university is the antagonism present in capitalist society as a whole. 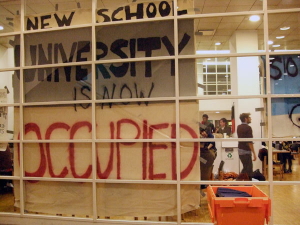 Published
2009-06-11
Issue
No 16 (2009): Academic Knowledge, Labor, and Neoliberalism
Section
Articles
Authors who publish with this journal agree to the following terms: